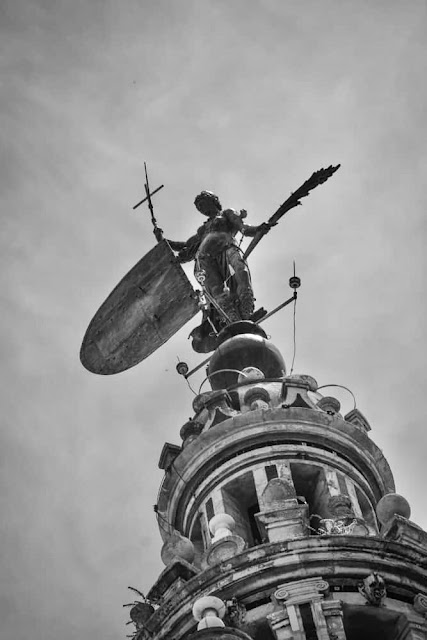 "The foundry is firing full force now. My abuelo is commissioned to repair the weathervane on top of the Giralda. I know poets have described the Giralda as a Mudéjar tower with a Christian crown. And this crown is called “giraldillo.” The slender bronze statue is said to represent Faith, but most in Sevilla call her Santa Juana. She holds a flag in one hand and a palm leaf in the other to indicate the direction of the four winds.

From the top of the Giralda, my abuelo watches twilight deepen over Sevilla as the sun sinks. He doesn’t notice the delicate lace work of brick that covers the four walls of the Giralda. He doesn’t notice the architecture that seems to defy gravity. Instead, he stands amid the pinnacles and spires he has seen all his life and looks out over his city. He sees his barrio. He follows the streets to the San Giles and then south to the Maestranza district where his fires are burning. Through guidebooks, I will discover and learn the name of the carved lace stonework on the Cathedral in the classic Mudéjar lozenge pattern called a “sebke.” And I will notice the confluence of Roman, Moorish and Catholic design upon the chiseled stones and gardens. Where I see layers of history, my abuelo sees only his home."